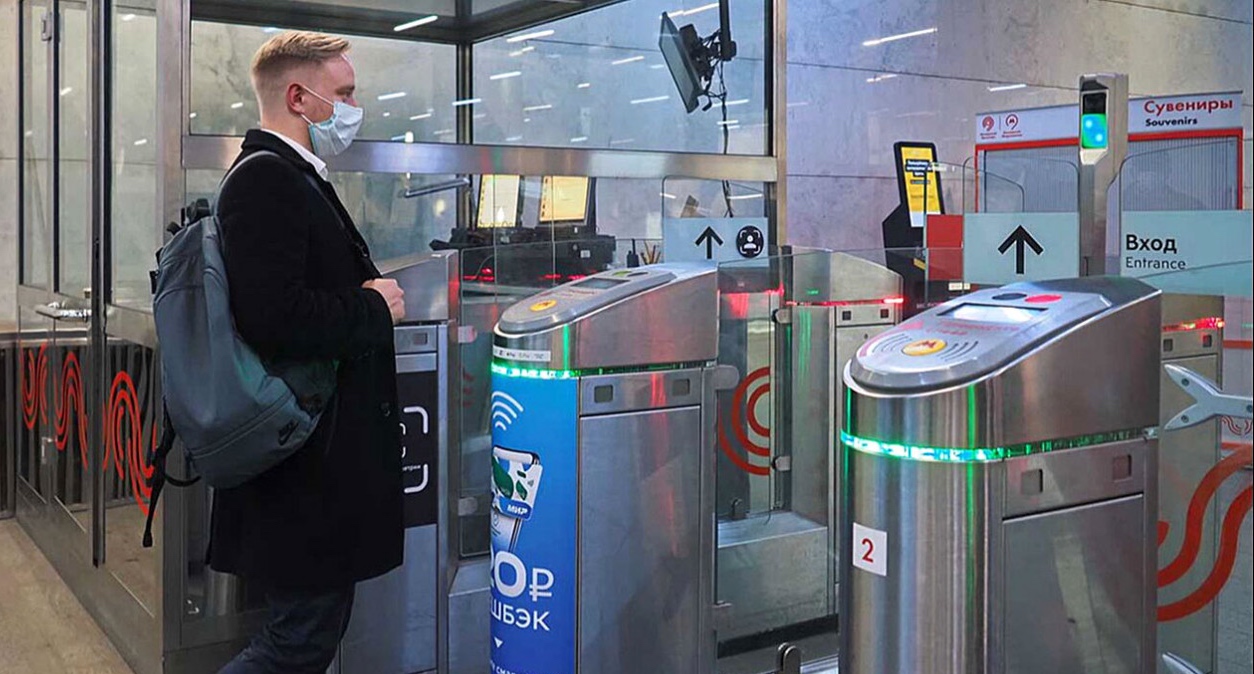 In the largest service of its kind launched to date, Moscow Metro has rolled out its “Face Pay” service. The completely hands-free service uses facial recognition technology to enable customers to pay fares. Masks and dim lighting could slow down transactions, the agency acknowledged.

The metro noted that 25,000 customers had registered for the service during the first full day after it launched the service. The number of sign-ups was beyond expectations.

Touting it as the largest rollout of biometric payments in the world, Moscow Metro launched its high-profile “Face Pay” service Friday, as expected, and predicted that 10% to 15% would regularly use the service in the next two to three years.

The service requires customers to register in the Moscow Metro mobile app with their bank cards and closed-loop Troika cards and to upload a photo. Cameras at the turnstile use the photo to compare with the live scan of the customer, though the transit agency said the system only reads key biometric features of the customer’s face, and that the “face image or other personal data of users are not compared.”

Much to Prove with Rollout
Moscow Metro, one of the largest transit agencies in the world, has much to prove with the completely hands-free Face Pay system. That includes whether it can handle fast throughput at busy stations, sometimes under less-than-optimal lighting conditions or with masked travelers. The system also raises privacy issues, with advocates criticizing the launch.

Customers so far do not seem to be put off by the potential privacy concerns. The metro noted in a rare follow-up announcement, Saturday, that 25,000 customers had registered for the service during the first full day after it launched the service. The agency said the number of sign-ups was beyond its expectations.

A video of a Face Pay demonstration released with the announcement Friday showed Moscow deputy mayor for Transport Maksim Liksutov passing through the turnstile by looking at the camera mounted on the other side of the gate. He lowered his mask below his nose before looking into the camera. It took three seconds from the time he fixed his gaze until the gate opened.

“Transparent glasses and masks will not interfere with the recognition of the passenger’s face if at least 40% of his face remains open,” he said in a statement. “If most of the face is covered, then it will take a little more time to recognize the passenger.”

A three-second transaction time would enable fewer than 20 customers per minute to pass through a given gate, and a Moscow Metro official said earlier this year that during tests of the system, masks had sometimes significantly slowed down the total time it took for the system to recognize the user, complete the transaction and open the turnstile to five or six seconds. The system deducts the fare payment or payments from the users’ registered bank cards.

Dim Lights Could Also Cause Delays
The agency also acknowledged that dimmer lights around some gates could add time to the verification process.

“At some stations that have less bright light, the system might operate a little longer, much like a smartphone camera that needs more time to recognize a person in the dark or in a poorly lit place,” Liksutov said.

But he noted that other payments methods that Moscow Metro has introduced over the past 10 years, which include contactless open-loop payments, have together reduced queues as metro ticket offices by more than three times. “And the launch of the Face Pay might reduce them even more,” he said, adding: “In the context of an epidemiological (Covid-19) threat, a completely contactless payment method is the safest one. (But) other payment options will be maintained.”

As Mobility Payments reported in September, when Moscow Metro extended the Face Pay test to half of its lines, the agency considers Face Pay as one of four major ways for customers to pay for metro service. This also includes the closed-loop Troika card, in addition to contactless payments.

At the time, Moscow Metro indicated that in addition to the metro’s older 12 lines, Face Pay would be accepted on the more recently built Moscow Central Circle metro line and suburban rail lines. All told, this would amount to at least 260 stations.

The agency didn’t say exactly how many stations were live with Face Pay Friday, but an article said the metro had launched the biometric fare payments technology in more 240 stations. The agency did say that at each of the stations it has equipped, at least one turnstile was live. At some busy stations, up to three turnstiles are live. And the agency said it would adjust the number of turnstiles equipped for Face Pay if demand for the new service was growing.

‘Big Brother Does Not Follow Us; He Opens Doors’
Russian authorities have much experience with facial recognition technology, and Moscow itself has an estimated 200,000 cameras deployed that are used for facial recognition, including to identify criminal suspects. Some human rights activists charge that these cameras also are used to track political protesters.

While not mentioning the cameras deployed throughout his city, deputy mayor Liksutov in his statement announcing the Face Pay rollout, insisted that “what worries individual passengers most of all, privacy, will be at the highest level (of concern for the agency).

“So, if you are still worried about “Big Brother,” you can be calm–he does not follow us, but serves you and opens all the doors.”