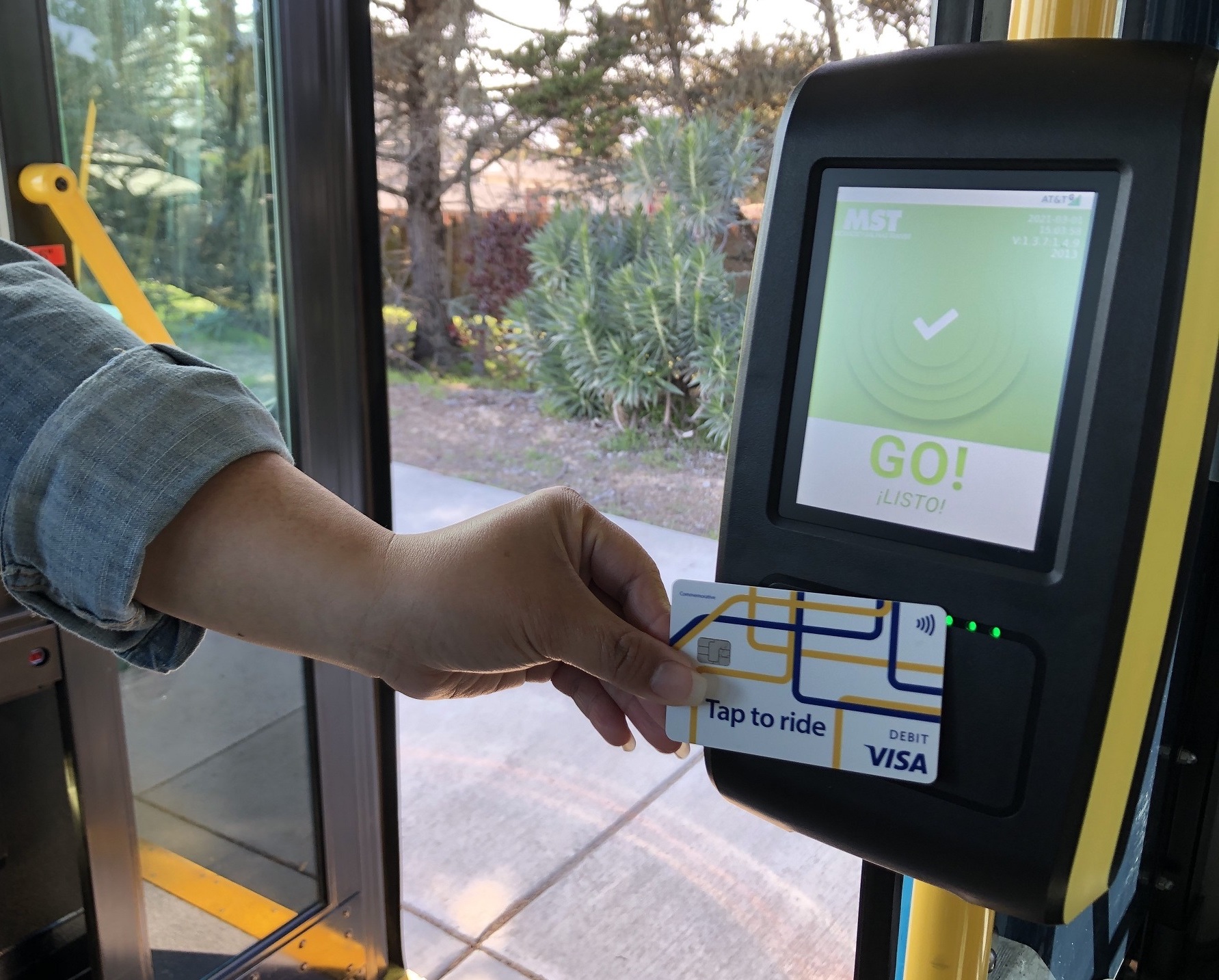 A small California bus agency, with state backing, has launched an innovative system that enables customers to verify their eligibility for fare discounts online, then instantly link that eligibility to a standard contactless open-loop credit or debit card. But there is a major drawback, at present. The system doesn’t yet work with bank cards loaded into NFC mobile wallets.

California bus agency Monterey-Salinas Transit recently launched what is believed to be the first system of its kind globally that enables customers to verify their eligibility for fare discounts online, then instantly link that eligibility to a standard contactless open-loop credit or debit card.

But there is a major drawback to the state-backed system, at present: It doesn’t work with bank cards loaded into NFC mobile wallets, like those connected with Apple Pay, Google Pay and Samsung Pay. That is a significant problem, since mobile wallets account for a substantial and growing share of contactless open-loop fare payments.

The head Monterey-Salinas Transit, or MST, told Mobility Payments that he expects the problem to be fixed by the middle of 2022 and agreed that without support for NFC wallets, the system could not scale.

Under the new system, launched last month as part of an ongoing open-loop payments pilot by MST, customers register for discounts on a state-run portal. They enter their family name and a credit or debit card number, along with their driver’s license or state ID number. The system then runs a check of California’s massive Department of Motor Vehicles database to make sure the customer is 65 or above and, therefore, entitled to receive a senior discount. If approved, the next time users tap their contactless EMV bank cards to pay fares, the discount is applied in the back office.

If successful, the system could provide a potential solution to a long-standing challenge for transit agencies that offer open-loop fare payments face. These agencies cannot support such familiar agency fare discounts as those for seniors, disabled persons, military veterans or students with open-loop cards. They must either issue special closed-loop or other fare cards or require customers to show an ID card when requested by agency personnel to verify their eligibility for the discount.

Fix Expected by Second Quarter
Carl Sedoryk, general manager and CEO of Monterey-Salinas Transit, told Mobility Payments that he hopes to support discounts for these other customer segments eventually.

But that would be after the agency, with help from technology suppliers working on the state-backed eligibility system, enable customers to use their digital wallets to redeem senior discounts, just as they can now tap their physical bank cards to receive these discounts. Sedoryk said developers are “working to offer these services no later than Q2.

“There is no fundamental technology barrier to adoption of digital wallets,” he told Mobility Payments. “The NFC wallet has a different PAN (DPAN) to a physical card. For the registration flow to work, the portal itself needs to include support for Google Pay and Apple Pay similar to other highly integrated e-commerce sales sites.”

The DPAN, or device primary account number, is a tokenized card number that token service providers create when a user successfully loads a credit or debit card into the digital wallet for Apple Pay or the other Pays services.

The tokenized number isn’t readily available to users, so transit agency customers registering their credit or debit cards to receive fare discounts would not be able to directly enter the token.

The discount eligibility verification system is being built by the state for the California Integrated Travel Project, or Cal-ITP. This office, which is part of the California Department of Transportation, is spearheading an effort to help transit agencies throughout the state roll out open-loop payments. It organized the general open-loop payments trial that MST launched in May, and at least three others that have launched in the state. The other agencies are also expected to expand their open-loop pilots to include a test of the eligibility verification system.

Support for Digital Wallets Needed for System to Scale
MST’s Sedoryk agreed that supporting digital wallets is absolutely essential for the verification system to scale, since the agency and other backers of the open-loop payments rollouts believe that many customers will want to use only their mobile wallets to pay for contactless fares.

“From that baseline, there is little point in implementing a solution that only works for physical plastic,” he said. “We are the first with a senior discount attached to a physical bank card and may become the first to link it to the “wallet version” of that card.”

Agencies that have rolled out open-loop payments have reported that a growing share of their contactless transactions are coming from NFC wallets, including New York’s Metropolitan Transportation Authority, which told Mobility Payments last fall that such digital payments services as Apple Pay and Google Pay accounted for 67% of all transactions for its OMNY open-loop payments service. At the same time, Transport for New South Wales in Sydney said NFC wallet transactions accounted for 55% of all contactless trips, with contactless accounting for more than 30% of all paid trips.

Update: MST’s Sedoryk said open-loop contactless payments have accounted for around 3% to 4% of paid transactions during the trial, which he said he’s pleased with, especially considering that ridership is still 50% of prepandemic numbers and many of the customers he’d expect to be early adopters of the technology haven’t yet returned. In addition, MST’s ridership is skewed heavily toward low income people, who may not have bank cards. Also, the agency hasn’t made a concerted marketing push promoting the open-loop service. End update.

Meanwhile, Sedoryk said the agency plans to expand the discount eligibility verification tool linked to bank cards to other customer segments eligible to receive discounts, including disabled persons and military veterans. But Sedoryk couldn’t say when this would happen, since state officials have yet to give Cal-ITP the green light to use the DMV database to verify the status of persons with disabilities or veterans.

“We just keep chipping away at it though, because it just makes sense,” he said, adding that he’d also like to see MST and other agencies be able to offer student discounts with open-loop cards by using other databases.

Student and youth discounts would likely not work under the DMV tie-in since many young people don’t have driver’s licenses or state ID cards yet.

“My personal goal is to recreate what we have done with the DMV to verify student eligibility by checking existing school district, community college or state college and university sources that already exist,” Sedoryk said. He added that this would not be easy, but neither is the current system, in which each transit agency has to verify the eligibility of riders seeking student, senior and other discounts.

Of course, many students and other young people also don’t have bank cards. An alternative is that schools districts could issue a Square contactless Cash Card linked to the fintech’s app, or something similar for eligible students, Sedoryk said. This could be loaded with transportation, nutrition and other benefits, and act as a student ID, he said. “The technology offers some great opportunities to do things differently.”

First, however, the discount system that links age-verification to bank cards has to work with NFC wallets. It’s not clear why MST and the state didn’t wait for the wallet functionality to be enabled before launching the first trial of the system. A technology vendor working on the system did not respond to questions from Mobility Payments over the holiday season.

In any case, developers are moving at a deliberate pace to enable NFC wallets to work with the verification system, Sedoryk said.

“We are learning by doing and making sure we take one step at the time,” he said. “We are the first in the world to offer the senior discount with a physical bank card. We are making sure we take enough time to take the lessons learned from that step on board before deploying the next features.”